Choose your country or region.

Close
Sign in Register E-mail:Info@infinity-electronic.com
Request a quote | About usEnglish

“This device achieves the best balance between high efficiency and ultra-low noise while shrinking power-supply size, it claims, with some justification – although it does have one large capacitor

Called the TPS7A78, it is a very advanced take on the decades-old capacitive dropper technique, which uses the series impedance of a capacitor (‘Cs’ in this case) at mains frequency to ‘loose’ much of the mains voltage without real power loss (at the price of an unfortunate power factor).

To this old idea, it boosts efficiency and adds regulation with a controllable on-die active mains rectifier front-end – filling up a reservoir capacitor (Cscin), which feeds a 4:1 switched capacitor voltage step-down – to step-up output current. On the output is a traditional LDO linear regulator. 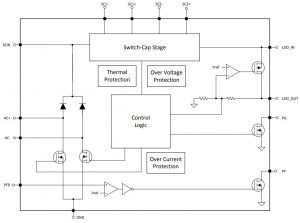 “The reactance of Cs sets the maximum AC charging current that is used to charge the rectified AC voltage bulk capacitor [Cscin]”, said the firm. ” The 4:1 switch cap stage has the effect of reducing the input current by 1/4th. The surge resistors [Rs] is used to limit inrush current to the device. Rs can also be used to protect the device from surge currents in conjunction with TVS [transient voltage suppressor] or MOV [metal-oxide varistor].”

With the output between 3.4V and 5V, the active rectifier is controlled to maintain a 600mV drop across the LDO (over both load and temperature) to minimise its power wastage – so if the output is set to 4V, the rectifier ensures 4.6V is maintained on the reservoir/LDO input.

For output voltages between 3.4V and 1.25V, the active rectifier maintains a fixed 4V on the reservoir.

If an over-voltage (>5.75V) is detected on the output – a heavy load is suddenly removed from the output, for example – a protection circuit stops the switched-capacitor section until the excess on the LDO input capacitor has been used. This is most likely to come into action when the output is set to 5V – the 5.75V threshold is close to the 5.6V that the controlled rectifier will be maintaining on the LDO input.

When ac is not available, there is an option to supply power from a dc source into the reservoir capacitor connection pin – check the data sheet for a few caveats around this option – one of which is that this can only be used with output voltages up to 3.3V.

Output current limiting is provided, backed-up by thermal protection should the over-load or short-circuit persist.

Following a thermal over-load, the output is turned back on once the device cools sufficiently.

Absolute mazimum voltages are 30V on the ac inputs, and 30V on the reservoir – although the latter drops to 24V when plied with dc. Up to 3A is briefly allowed from ac inputs to the reservoir. Max output is 120mA in full-bridge, 60mA in half).

One possible application is powering smart meters, where, according to TI, “unlike typical AC to DC power solutions, the TPS7A78 does not requires external magnetics which makes it an excellent choice for e-metering applications by making it more tamper resistant. It meets IEC 61000-4-8 standard required by applications such as electronic metering.”

It can also meet electromagnetic compatibility requirements using the TPS7A78, read the short article, “How to make a simple nonmagnetic AC/DC power supply.””